The end cap cell or boundary cell is placed at both the ends of each placement row to terminate the row. It has also been placed at the top and bottom row at the block level to make integration with other blocks. Some standard cell library has also corner end cap cells to place the corner of the block. Boundary cells have fixed attribute, therefore these cells can not be moved during the optimization. A typical placement of end cap cells at the end of the row has shown in figure-1.

The end cap cells are placed in the design because of the following reasons:

The boundary cell is a physical-only cell, has no logical functions and therefore these cells are not a part of the netlist.  Boundary cells have mainly Nwell layer, implant layers, and dummy poly layer and metal rails as shown in the figure-2. 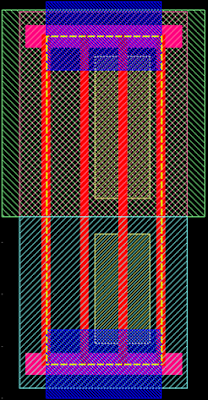 Boundary cells are placed just after the macro placement and site row creation. Boundary cell is placed before the placement of standard cells and therefore it is called a pre-placed cell. End cap cells cab be added using GUI interface or through the tool commands. Commands to add the endcap cells in Innovus and ICC tools have given below.

insert_boundary_cell
For details of these commands and related switches refer to the tool’s command man page.
Thank you.