Figure-1 shows the parasitic BJT formation which causes latch-up. n-well and p-substrate resistance can be reduced by increasing the doping but it will degrade the device performance drastically.  But we can cut down the gains of parasitic BJT (β) and prevent the latch-up issue. Some popular techniques for latch-up prevention are as below.

If Vout goes bellow the VSS and the diode between drain and p-substrate of nMOS become forward bias, electrons from drain start injecting from to substrate and collected by the body of pMOS. This cause a current from in the opposite direction of electron flow. which ultimately triggers the Qp transistor as shown in the figure-1. Now to break this chain, two sets of n+ implant in n-well, p+ implant on p-substrate added in between nMOS and nMOS as shown in the figure-2. These will collect the electrons injected from the drain of nMOS and prevent the current flow from the drain of nMOS to the body of pMOS. Which stops triggering the Qp BJT. 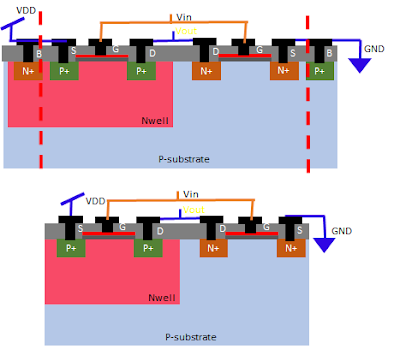 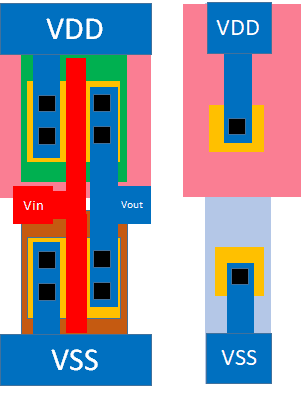 The well tap cells are placed in the standard cell row in the regular interval as per the maximum distance rule define in technology library.

Figure-5: Crosssection of a trench isolation 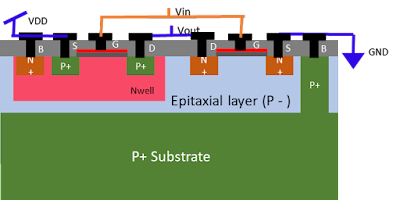 The only problem with this technique is, it’s a sophisticated process to grow the epitaxy layer. Another alternative is we can use the epitaxy wafer for this purpose. 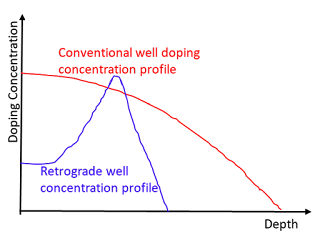 A retrograde well doping is done at the bottom of normal n-well as shown in the figure-8. This region has a high doping concentration and creates a low resistance path. The body connection which is taken from N+ doping is extended to this high dopped region. So there is the formation of low resistive path bellow the n-well which stops the triggering of PNPN device. A cross-section view of retrograde well doping has shown in figure-8.

6. Combination of the epitaxial layer and retrograde well doping :

We can use a combination of the epitaxial layer and retrograde well doping together both the techniques together which is also a very effective way to prevent the latch-up issue but the process is a bit complex.

In SOI (Silicon on Insulator) technology an oxide layer comes bellow the source-drain doping and stop the parasitic BJTs formation. So SOI technology completely eliminates the latch-up issue. A cross-section of CMOS in SOI technology has shown in figure-9.

We can use a combination of the epitaxial layer and retrograde well doping together both the techniques together which is also a very effective way to prevent the latch-up issue but the process is a bit complex.

These are the ways to prevent latch-up in CMOS technology. Each technique has its own pros and cons.