Gate Oxide of a MOS transistor is the most sensitive part of a MOS device. Special care needs to be taken during fabrication of ASIC to protect it from any damages during fabrication steps and ASIC operation too. The antenna effect is a phenomenon that may cause damage to the gate oxide of MOS during the fabrication process especially due to the plasma etching process. In this article, we will investigate the antenna effect phenomena in detail and the reasons which are responsible for this effect.

What is the Antenna Effect?

The term Antenna Effect might not give you the right intuition about the actual effect it may lead you to think about electromagnetic radiation or transmitter-receiver concepts but here the case is different. So It has another popular name which is called “Plasma Induced Gate Oxide Damage” which provides the right intuition about the effect. As this name itself indicates that this is an effect caused by the Gate Oxide Damage due to the Plasma Etching process during the fabrication process of VLSI chips. 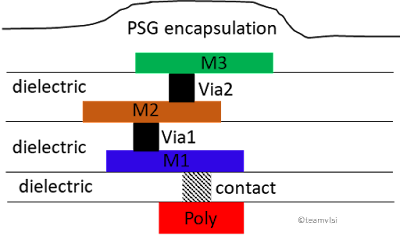 Over the polysilicon, a layer of dielectric is deposited and then cuts are made for the contact. Over the contact, Metal-1 is deposited and patterned and etched the extra metal and filled the whole region by the dielectric. Now before fabricating the metal-2, cuts are made in dielectrics for Via-1 and filled with Via-1 then over the via-1 Metal-2 is deposited. Again in the same way Metal 2 is etched and filled with dielectrics. This process is repeated as many times as the number of metal layers is there. At the end of all the metals processed, A PSG encapsulation is done as shown in the figure.

There are basically three steps are performed to process any metal layer after the corresponding via/contact is fabricated.

In the first step metal is deposited, In the second step the unwanted area of metal is etched away and in the third step, CMP (Chemical Mechanical Policing) is done.

Here the plasma etching process will be explained in brief just to understand the process. Plasma etching involves a high-speed stream of plasma of an appropriate gas mixture being shot at the sample. The plasma source is known as etch species are either charged ions or neutral atoms or radicals. During the etching process, plasma generates volatile etch products from the chemical reaction between the target material and the reactive species generated by the plasma. A basic setup of plasma etching has shown in the figure below.

Both top and bottom electrodes are equal in size and parallel to each other. Bottom electrode holds the wafer and it is grounded. Due to the application of RF voltage and high pressure (P = 100mT to 1T) a plasma is set up between the two electrodes. High energetic electrons react with gas molecules and give various reactive species, neutral species and ions. Neutral species provide chemical etching and ions provide physical etching and a combination of reactive species and ions provides Ion Enhanced Etching.

We will discuss the prevention techniques of the Antenna effect in the next article.